The promise of free land brought German speaking settlers to the Nebraska prairie known as Olive Branch, where Kramer is located today. Some settlers came directly from Germany, others moved from German settlements east of Nebraska. These Germans brought with them the Christian beliefs and convictions of Dr. Martin Luther.

Some of the historic events which brought these people to Nebraska's rolling plains include: The Homestead Act of May 20, 1862, the building of the first railroad beginning in Omaha in 1865, the end of the Civil War, Nebraska established as a state on March 1, 1867.

Many dangers and hardship s plagued these pioneers. Drought and grasshoppers were most dreaded scourges. Marauding Indians were reported to have swept through the Olive Branch community and looted cattle, crops, garden stuff, and other valuables. Loneliness caused much agony on these empty prairies. A trip for supplies meant several days travel by ox teams over unmarked trails. Lack of money made it impossible to buy even the smallest conveniences. Sometimes a hole was dug into the bank of a creek or a hillside to serve as a home. When sod houses were constructed, they often presented hazards such as rattle snakes and lice.

Against this background a few families organized the settlement known as Olive Branch. The opening paragraph of the first minutes indicate that St. John's Congregation existed for two years as a congregation before they had a formal constitution. In the spring of 1873 a committee was appointed to draw up a constitution. This committee met on July 31, 1874. The first to sign the constitution were: Traugott Haessler , Pastor; Franz Schlichtemeier; Henry Wohl; Michal Steinert; Andreis Moser; Joahnn Herzog; Matteas Limbeck; Henry Jans; Fritz Mundt; Martin Renner; William Wohl; L. Roock; and George Pittnauer. Although this constitution has been translated and revised, it is basically unchanged in its fundamental Biblical confessional stand. 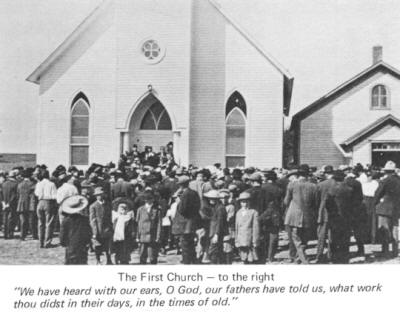 At first St. John's and Salt Creek formed one parish. The Salt Creek congregation was located four miles east and three miles south of the Clatonia Lutheran Church. Meeting in 1870 and 1872, these two congregations decided to call a minister from the Synod of Missouri, Ohio, and other states. This synod is known as the Lutheran Church Missouri Synod today. The dual parish sent out a call for a pastor on January 14, 1872.

Pastor Traugott Haessler responded to this call and is reported to have been active in the community in August of 1872. He was ordained at the Western District Convention held at Schaumberg, Illinois in 1873. Tragedy accompanied his first ministerial act. August Schmidt, an infant of five months, was baptized on August 17 and died the next day. Also, Pastor Haessler's home was burned by arsonists.

Earlier missionaries had come through the community to aid the settlers in worship. These early missionaries encountered problems we do not even consider today. Zealous in efforts to share religious convictions, they often went without food. One pastor reports that he lived on raisins for days at a time as he searched for people with whom he might share his religious convictions.

On April 23, 1876 St. John's Congregation became a member of the Lutheran Church Missouri Synod. Together with sister congregations of this synod, St. John's has engaged in mission work, works of benevolence, and promotion of educational and charitable institutions.
Our congregation once helped a congregation in Iowa whose church had been destroyed by fire. Congregations in eastern Nebraska are reported to have sent carloads of grain to drought stricken Lutherans in western Nebraska. Collections are recorded for our educational institutions at Seward and St. Louis and for the Fremont orphanage. The Missouri Synod sent $8000 to support missions work in Nebraska during the drought and grasshopper years of 1891-1894.

The first church was furnished with debt, drought and grasshoppers hindering members. The pulpit was behind the altar and above it. Mr. M. Gerdes built the altar. A stove was located in the middle of the Church. Bride and groom parted at the stove as they came down to the altar to be married. At funerals the body would be viewed outside the church, and then committed to the ground, and then a service was held within the church. 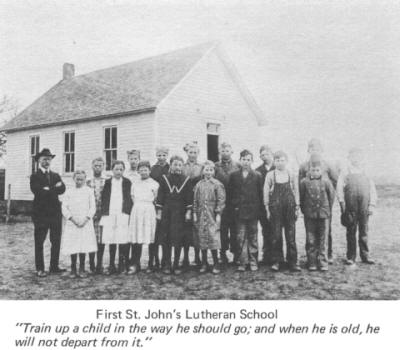 School was conducted at St. John's Congregation by the early pastors in the rear of the Church. Church benches served as desks. A door on rollers separated the back of the church where school was conducted during the week. In 1903 the congregation erected a school building, 18’ x 26’ X 9’. School began on November 1 and was held for four full days per week.

When Pastor G. A. Lohr was called to St. John's in 1893, he was paid $400 a year plus a share in the forty acres. The organist, Helena Schultz, was paid $15 a year. The janitor received $12 a year. The first organ cost $200. August Lohr, Pastor G. A. Lohr's son, received his early schooling at St. John's Lutheran School and dedicated his life to teaching in Lutheran schools.

The forty acres that constitute the congregation's church property were part of the land that United States government granted to the rail roads. Mr. Franz Schlichtemeier went to the courthouse to purchase the land for the congregation. Just as he was coming out of the courthouse, a delegation of a different denomination was coming to purchase the very property which Mr. Schlichtemeier had in his possession.

The first parsonage was constructed at a cost of $505.95 in 1877 after a two year delay. Early reference is also made to repairing a barn that was located on the church property.

In January of 1911, during the ministry of Pastor Fr. Schwarz, a committee was elected to go to different churches and examine them. A church at DeWitt was used as the pattern for the present church. The dimensions are 68' X 39' x 18' high. Building was begun on April 11 and our present church was dedicated on September 17, 1911.

The congregation built the present parsonage when Pastor John F. Gerike served the parish. The dimensions are 32' x 34' x 18' high. Pipes for carbide lights, the latest in those days, were built into the house.

German was the language used by the congregation from its origin. Due to the unfavorable attitude toward anything German during World War I, the transition from the German language to English was hastened. The congregation resolved to have as many English services as German services. English hymnals were purchased. The minutes of the voters meeting were kept in German until 1933. Gradually English became the language of the congregation.

Pastor Gericke resigned because of ill health and Pastor Albert Cholcher became shepherd of the congregation in 1919. By this time the congregation was engaging qualified students to teach school. On October 19, 1924 the congregation resolved to erect a new school building. Since improved heating and lighting went into the new school, the congregation also used the school as a meeting place and as a place to conduct church services during cold and windy winter days.